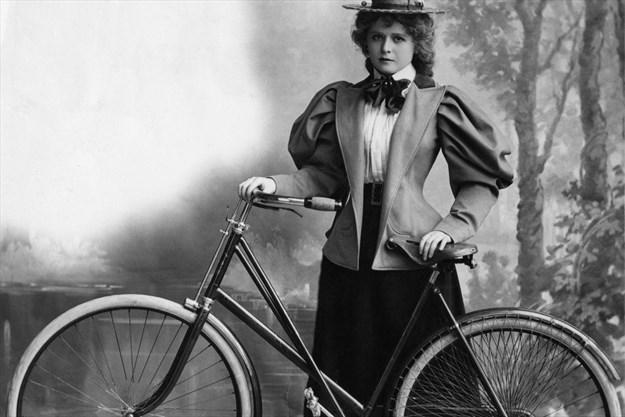 Are dresses the reason women aren’t cycling in Hamilton? The comment by Coun. Lloyd Ferguson sparked backlash on social media, with cyclists of both genders venting online, labeling the question as ignorant, sexist and “stuck in the 1950s.” - GETTY IMAGES

A councillor's question about whether "sundresses" keep women from cycling has spurred on a local campaign for safer bike infrastructure — and even a dress-themed bicycle ride at City Hall.

Advocates at that meeting urged a city-wide expansion of such protected bike lanes, at one point noting studies suggest far fewer women cycle regularly than men because of a lack of safe infrastructure.

Coun. Lloyd Ferguson acknowledged the safety argument — then dropped a social media grenade by wondering aloud about other possible reasons for the cycling gender divide.

"I'd love to hear from the cycling committee their thoughts on that, particularly from the female members," he said, in asking for a report from staff. "Is it because they like to wear sundresses in summer and they don't feel comfortable on bikes? Or is there another reason again? I don't know."

After the Spectator tweeted out the remark, cyclists of both genders vented online, labelling the question as ignorant, sexist and "stuck in the 1950s." (Some also noted the councillor's past contentious comments around the council horseshoe, including a reference to "opening the kimono" and a joke, for which he apologized, about chickens on buses in "backwards" Colombia.)

Ferguson said later he understands the cycling safety argument, but wanted to ask staff for a breakdown of any other reasons for the gender disparity. He said he did not think his question was sexist or stereotypical and added he did not intend to offend anyone.

"There could be a multitude of other reasons. It was just a random example … I wondered if that would be comfortable, whether that would be a factor," said the Ancaster councillor, who added he recalled seeing many cyclists in dresses during a visit to bike-friendly Amsterdam in the Netherlands.

Several residents urged cyclists online to use the comment as a rallying cry for bike safety improvements in the city. The online back-and-forth morphed into a call for a "Sun Dress Ride" starting at City Hall at 5 p.m. on June 27 — just as city council is slated to begin.

Locally, surveys by bikeshare organization SoBi Hamilton suggest 49 per cent of its riders are women.

But the bikeshare group tweeted Tuesday its survey numbers are likely "the exception" in Hamilton. "We work hard to make the system equitable and inclusive. Unfortunately there is gender disparity with cycling numbers overall in the city and the solution is more infrastructure and better, safer infrastructure."

A Ryerson University-backed study in 2016 said only 30 per cent of regular cyclists in the GTA and Hamilton are women.

Reasons variously cited for the disparity include household responsibilities, sexual harassment and a lack of safe infrastructure. A Canadian study cited by Ryerson researchers found women are less willing than men to ride bikes on roads without dedicated bike lanes.

Environment Hamilton head Lynda Lukasik — who cited the statistics that prompted Ferguson's question in the first place — argued gender parity on the bike path is important if the city truly wants to be successful in encouraging alternative transportation "for all of its citizens."

The veteran cyclist later said she is still uncomfortable biking in many parts of the city where bike lanes — protected or not — do not exist. "I can assure you it's not the sundresses stopping us from riding," she said.

The city has added another major two-way cycling track, north-to-south on Bay Street, since its original pilot project on Cannon. That addition officially put the city over the halfway mark in terms of kilometres of bike lanes or trails envisioned in its long-term cycling master plan.

Despite ongoing improvements, the city recorded 179 collisions between cars and bikes — along with 143 injuries — in 2016, the highest annual number since before amalgamation.

Councillors will hear a staff update on future cycling infrastructure priorities Wednesday when they take a first look at a long-delayed transportation master plan update.