ArcelorMittal Dofasco wants a year-long extension to complete upgrades to its coke-making plants. Environmentalists want the province to say no. (John Rieti/CBC)

ArcelorMittal Dofasco's request for a year-long extension to upgrade its coke-making facilities is just the steelmaker's latest attempt to drag out the process while their plants continue to spew pollution, say Hamilton environmentalists.

Residents living in the shadow of the steelmaker have already been calling on the company to restore its aging equipment for at least a decade, said Jochen Bezner. Now they're done waiting.

"It's unfair that the community has to carry the burden of not implementing these changes earlier," said Bezner, a member of the Coalition Against Pollution (CAP). "We are the ones that have to breathe the air."

Bezner also represents the Crown Point neighbourhood on ArcelorMittal Dofasco's community liaison committee, which is meeting Thursday night. He said he and other CAP members plan to speak out against the request for more time.

The coke plant restoration is a key part of the company's plans to lower toxic emissions. The $87-million project includes facility upgrades and shutting down one of its plants.

A deadline of Dec. 31, 2018 was outlined in an order from the Ministry of Environment, Conservation and Parks. But in a statement sent to CBC News, John Lundrigan, Dofasco's general manager of environment, said the company has encountered additional fixes that will require more time.

Still, "we are pleased with overall improvements at our coke-making facilities," he wrote. "We continue to be focused on continuous improvement, while sharing our achievements and challenges with the Ministry of Environment, Conservation and Parks and our community liaison committee."

Ward 4 councillor Sam Merulla said he sees the request from the steelmaker as part of an ongoing strategy to continue "prolonging the inevitable."

He believes Ontario's newly elected leader, Doug Ford, might be just the break the company was waiting for.

"They're probably hoping the new premier, the new government will be far more susceptible to this type of manipulation of a protracted period of extensions," he said.

Meanwhile, the councillor said, the city, its residents and the environment continue to suffer the consequences.

"Frankly I think it's irresponsible to even request this extension," he said. "It would be even more irresponsible if it's granted."

Delay should lead to punishment

Bezner echoed Merulla's comments about the delays. He said he's concerned about seemingly "constant" malfunctions that send clouds of carcinogens and pollutants floating over his neighbourhood. 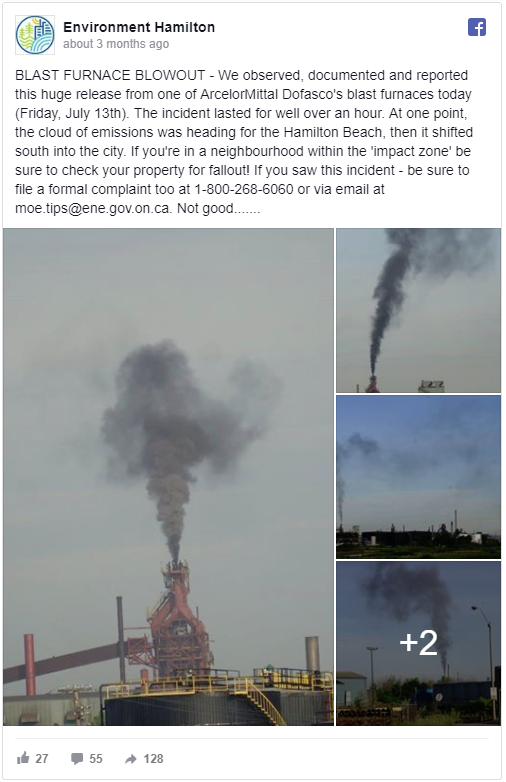 His community has had enough, he said. It's called on the ministry to deny Dofasco's request, or at least show them the delay will carry consequences.

"The current timing should be kept, and if the company cannot keep it, I think there needs to be some sort of punishment."

Residents will be given an opportunity to air their concerns with provincial officials during the community meeting, which is at 1330 Burlington St. E. at 6:30 p.m.