The city is still searching for the source of a stench that spurred the plant closure and forced the ongoing dumping of food waste in the landfill. 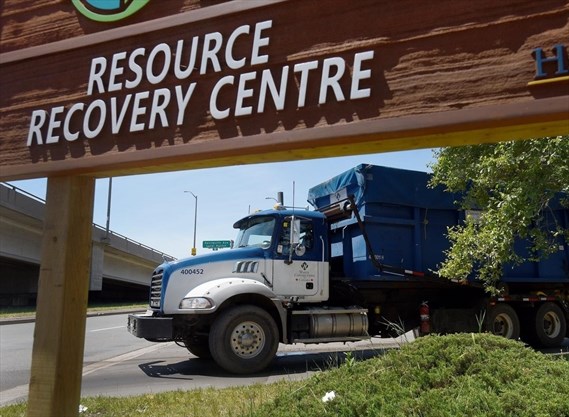 Your food waste is headed to the dump for the foreseeable future as the city struggles to explain an illness-inducing stench that forced the closure of the municipal compost plant three weeks ago.

The city says the exact reason or escape route for the odious odour remains a mystery, and there is no timeline to reopen the Burlington Street East facility. But in the meantime, two councillors are offering cash for a backyard composter giveaway for hundreds of lower city residents.

"We are far from being back up and running," said Coun. Sam Merulla, who has called for the city to study taking the compost contract in-house, moving operations out of the area — or even out of Hamilton.

In the meantime, Merulla supported a motion from Coun. Matthew Green last week to put up ward infrastructure cash to give away as many as 2,000 free backyard composters to lower city residents. At the time, only lower city councillors signed on, but Green expressed hope Tuesday the idea could spread across the city if the experiment is popular.

"I get a sense there will be interest," he said of household composting, which has also been championed recently by advocacy group Environment Hamilton. Green said he wanted to remove "barriers" for residents anxious to continue doing their part for the environment during the plant closure.

The city has yet to determine how or when the free backyard composters, which normally cost about $35, will be made available. More details are expected later this week, but Merulla said any handout of the composters will include "education" on proper usage to help avoid backyard odours and rodents. (For tips, check out the city's composting page at hamilton.ca.)

The city closed its compost plant, which is run by AIM Environmental, in late June after a flurry of odour complaints from residents as far away as the downtown and Gage Park. Provincial investigators are probing whether the stinky plant broke the law and have asked the city to come up with an "action plan" to prevent future problems.

So far, the city has focused on emptying and cleaning the compost "curing" building that is a prime suspect for a stench that some residents blamed for nausea and headaches, said waste manager Emil Prpic.

"But is it the sole contributor? That's what we're still trying to figure out now," said Prpic, who added the city has hired odour consultant Dillon Consulting to do an "in-depth" review of the plant, its wood chip biofilter and air handling system.

A separate company with expertise in "odour patrols" will also periodically sniff-test the neighbourhood.

Prpic acknowledged residents are disappointed about the ongoing need to send painstakingly separated organic waste to the Glanbrook dump.

He said the city is looking into the possibility of sending local food waste to compost plants in other cities if the plant investigation reveals a problem that cannot be easily or quickly resolved. But he couldn't say how soon such a decision might be made.

"It's not our preference to put this material in the landfill," said Prpic, who stressed residents are still being asked to separate food waste and put it in green bins for regular curbside collection.

"But we don't want to reopen (the plant) and find we have the same problem. We want to be thorough and ensure we are not missing anything."