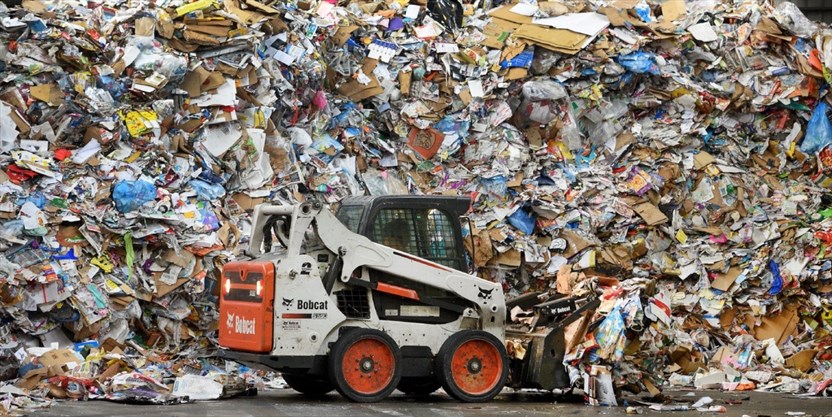 The first week of January is the busiest week of the year for employees at the City of Hamilton's Material Recycling Facility. In this photo a bobcat operator faces a wall of recyclables. Recycled paper and plastic in Hamilton has nowhere to go now that China has banned most foreign imported recyclables. The city's contractor is now scrambling to find takers for our old newspapers, plastic bags and cardboard, other than a landfill site. - Cathie Coward,The Hamilton Spectator

Hamilton is joining a national scramble to save blue box recyclables from the dump now that China has effectively banned most foreign recycled material.

The new ban, which started Jan. 1, hurts cities across the country because China has for years been one of the biggest recipients of Canadian recycled paper and plastics.

The ban forms part of a double-whammy for Hamilton, said city waste and recycling manager Emil Prpic, because a paper plant in nearby Niagara that used to take Hamilton paper and cardboard also closed in 2017.

"It will affect us in terms of being able to move the material, but also what rates we're getting for the materials," said Prpic, noting the city normally sees annual revenues of about $4 million from the sale of recycled material.

With the ban in sight, prices for mixed rigid plastic dropped from $53 to $10 per tonne between 2016 and the end of last year. Mixed paper prices also dropped 30 per cent.

Cities like Halifax have started landfilling some plastics for lack of an alternative buyer.

Hamilton is not in such dire straits, said Prpic, emphasizing no local recyclables have been trashed and blue box collection continues as usual. So far, he said the local impact is "slow movement" of material to end markets and longer on-site storage.

Executive vice-president Mark Badger sounded more optimistic about the challenge, noting the company's extensive customer network and "really hard work" means it has not had to resort to emergency "stockpiling" so far.

By contrast, Calgary has reportedly amassed 5,000 tonnes of recycled material that has no buyer.

Badger declined to say how much of Hamilton's recyclables the company might normally sell in Chinese markets.

But he suggested the Chinese ban — which restricts imported recycled material through more stringent contamination criteria — represents a "paradigm shift" that is here to stay.

Badger said the company is focused on using new training and technology to cut contamination in processed recyclables. (Think plastic bags mixed with collected newspapers, or leftover food in cans or bottles.)

Residents can do their part, he added, by not carelessly mixing trash or food stuff in with the blue box. "We all have to be diligent," he said.

(The city has a "What Goes Where?" recycling tutorial you can find on hamilton.ca under the heading 'Garbage & Recycling.')

Environment Hamilton head Lynda Lukasik said she was "shocked" to learn cities were still so dependent on foreign buyers for recyclables.

"That just hit me between the eyes," she said, pointing to the "huge carbon footprint" of shipping supposedly environmentally friendly recycled material around the world. "I'm hoping this pressures us (in North America) to more effectively and sustainably manage our own material."

But the longtime air quality advocate added she doesn't want Hamilton to revisit its contentious, off-and-on study of incineration as a potential solution. "I hope we're finally done with that conversation," she said.

For now, Prpic said cities are competing to sell material in a shrinking market. The city collects all kinds of blue box recyclables, including aluminum cans, glass bottles and myriad plastics.

But plastic and fibre make up the lion's share of the 40,000-or-so tonnes of recyclables processed in Hamilton each year. Paper and cardboard alone account for 27,000 tonnes.

Prpic noted Canadian and U.S. leaders are negotiating with China in the hopes of changing or ending the ban.

Longer term, Ontario is slowly moving to overhaul how blue box items are collected and recycled, including a greater emphasis on making manufacturers responsible for products from cradle to grave.

Under the latest proposals, some municipal governments could get out of the recycling business altogether. But change is unlikely before the provincial election in June.