Brakes slammed on cycling funding with end of cap-and-trade

If no other funding emerges, the city will continue paying for projects out of the municipal budget, Daryl Bender, the city’s alternative transportation lead, says. 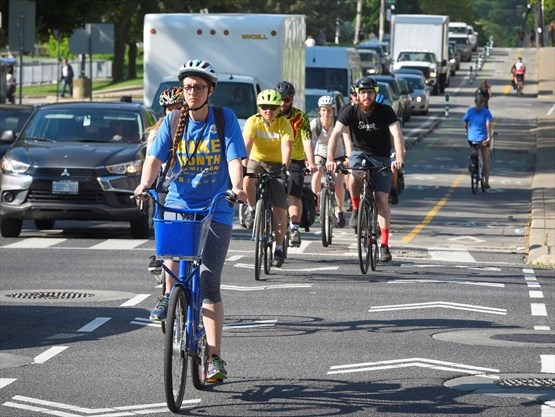 Millions in provincial funding will no longer contribute to the expansion of Hamilton's cycling network after the end of Ontario's cap-and-trade program.

Introduced by the previous Liberal government, the program has generated $3.7 million for cycling projects in the city.

It was an "opportunity to address a few higher-order projects at a faster rate, and that is how the city plans to utilize those funds," Daryl Bender, the city's alternative transportation lead, said Thursday.

But Premier Doug Ford's new Progressive Conservative government scrapped the scheme shortly after ousting the Liberals in the June election.

If no other funding emerges, the city will continue paying for projects out of the municipal budget, Bender said.

The city spent about $1 million a year on bike lanes and multi-use trails. That's less than half of the $2.5 million needed to meet its 20-year bike lane goal by 2029.

The $3.7 million came from the $100-million Ontario Municipal Commuter Cycling Program, once funded by the Liberals' climate plan.

Schools, hospitals and social housing are also losing out on dollars for energy-efficient renovations with the loss of other programs under cap-and-trade.

The market-based system put a limit on how much greenhouse gas businesses could emit. It allowed companies to buy and sell carbon allowances.

It raised $2.9 billion to fight greenhouse gas emissions, notes a new report by the Environmental Commissioner of Ontario. "To safeguard Ontarians from the dangers posed by climate change and to ensure that the danger does not grow, Ontario must take aggressive and sustained climate action."

The insurance industry is also affected, the report notes. "In the first five months of 2018, extreme weather had already resulted in nearly three-quarters of a billion dollars in insured damage in Ontario."

"Since assuming office, our government has acted quickly to keep this promise and, as a result, people across Ontario are benefitting from lower costs on fuel, home heating and energy," Phillips wrote in a letter to Saxe.

He added: "Your report does contain a number of other ideas that I am confident could align with our made-in-Ontario solution to address climate change."

"We were heading in a direction that was having an impact."