“Bleeder emissions” happened when employees were starting up a blast furnace that was down for maintenance, steelmaker says. 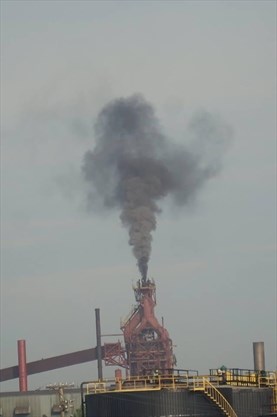 Thick black smoke gushed out of a blast furnace at ArcelorMittal Dofasco for more than an hour Friday, spurring a slew of complaints and photos from angry residents.

Environment Hamilton head Lynda Lukasik posted some of the first photos of the black pollution spilling from the bayfront steelmaker's facilities. Those photos were rapidly echoed on neighbourhood Facebook sites, attracting dozens of comments from residents worried about potential black fallout.

"It looked like a catastrophic blowout, like nothing I've ever seen," said Lukasik, who took photos from Windemere Basin and later from along Burlington Street East. She said the black cloud drifted near the Hamilton beach community before appearing to shift south over the city.

"It went on for a long time. I'd be surprised if homeowners do not find evidence of fallout in some neighbourhoods."

Company environment director John Lundrigan confirmed by email the "sudden and unforeseen" pollution occurred between 8:04 and 9:13 a.m. from a safety release valve at the No. 2 blast furnace.

Lundrigan said the "bleeder emissions" happened when employees were starting up a blast furnace that was down for maintenance. He added the pollution was mostly made up of carbon and coal.

An interruption of gas to the company's coke-making facilities also lengthened "baking" times, which resulted in more "visible emissions" from the coke stacks.

All of this occurred during "unusual circumstances in steelmaking," which included a longer-than-expected maintenance shutdown for the company's basic oxygen furnace, known as the KOBM.

"Our iron-making and environment teams have stabilized the furnace and are investigating the cause and assessing any potential impact," Lundigran wrote in an email forwarded to The Spectator, adding the Ministry of the Environment, Conservation and Parks has also been notified.

Lukasik said neighbourhood residents on the steelmaker's community liaison committee would likely have "many questions" at an already-planned meeting next Thursday. "All of these unique circumstances and shutdowns they're talking about? That's news to us."

Ward 4 councillor Sam Merulla said frustrated residents have contacted him to complain and he has forwarded their photos, videos and concerns to the ministry to investigate.

Merulla noted the company has been criticized for repeated "black cloud" incidents in the last year and resident frustration is growing with the apparent "lack of progress."

ArcelorMittal Dofasco has said previously it is working to upgrade its facilities, but in some cases the improvement work itself leads to brief periods of extra pollution.

"At what point do we see things getting better?" Merulla asked.

"We're all for jobs and economic development, we all understand the challenges the steel industry is faced with … but the great corporate entities of this world are responsible environmentally as well. They are not being environmentally responsible."

He urged residents to report all visible pollution incidents to the ministry at 1-800-268-6060.

The ministry could not be reached.