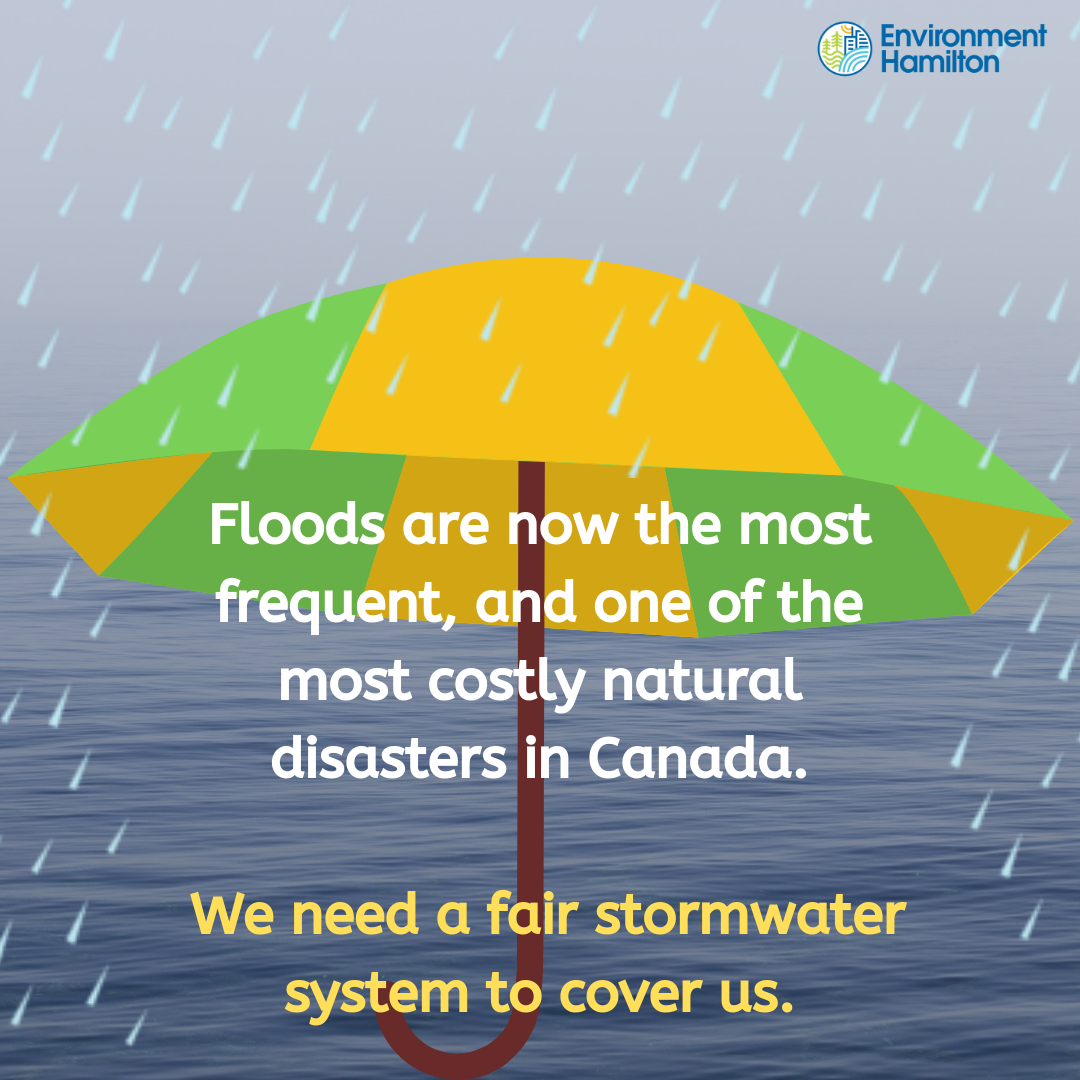 Stormwater naturally soaks into the ground to be absorbed by vegetation, replenish aquifers, or slowly find its way into our rivers and lakes. When this natural process is disrupted by human infrastructure, the stormwater runoff can become an overwhelming problem for our stormwater management system to handle. Stormwater runoff is the rain and melted snow that falls on, and then runs off impervious surfaces such as roofing and pavement. Stormwater not only increases the potential for flooding, but also washes environmentally harmful substances such as pesticides, industrial toxins, and animal waste into our waterways and, for Hamilton, our harbour. Climate change has been, and will continue to increase Hamilton’s amount of annual precipitation. Limiting and cutting down on the amount of stormwater runoff we generate is an important part of preserving the health of our local environment and water table, as well as reducing flood risks and damage for local homeowners and businesses.

For many communities and areas in Canada, flooding represents the first tangible challenge presented by climate change, and Hamilton is no exception. Hamilton is experiencing more frequent and intense rainfall, with an average 3% increase in rainfall per year since 1970. Due to the high density of impermeable surfaces such as roofs, parking, driveways and roads in the city, most of this water is drained into the stormwater system. Aging infrastructure is unable to keep up with the rapidly changing climate, leading to a multitude of impacts for cities and their residents all over, and Hamilton is no different. The excess stress on the stormwater system has led to stormwater management costs doubling in less than ten years, and during severe events, unprocessed sewage is drained into the Harbour which is now reported publicly by the City. This is why Environment Hamilton has joined city staff, municipal planning, and climate change experts in calling for a new stormwater management funding system that addresses this problem head on, as well as creating new opportunities for our city to increase resiliency in the face of climate change.

Hamilton’s stormwater management system is currently paid primarily through water bill rates. As stormwater costs rise, successful conservation efforts have reduced the amount of money available to this purpose. Right now, properties like commercial parking lots with large impervious surface areas contribute disproportionately to the problem compared to how much they contribute financially to dealing with it. In a fair fee system, financial contributions would be determined by the amount of impervious surface on a property, which would ensure there is enough funding to handle this issue and that these funds would be collected in an equitable manner.

Based on these realities, and the success of a growing list of Ontario municipalities that includes Kitchener, Ottawa, London and Mississauga, Hamilton city staff have proposed looking at a new funding system to create a reliable, direct, and transparent funding mechanism for stormwater management. This could and should increase transparency, so that citizens can see where our money is going, create more stability, so that the city can plan for the future, and create a mechanism to encourage property owners to make improvements like rain gardens to reduce our stormwater burden.

There are many ways to implement this type of fee restructuring. We at Environment Hamilton want to see an incentive-based program, where any property owner can make small changes such as adding rain barrels, rain gardens, or reducing the amount of impermeable surfaces to reduce fees. Environment Hamilton is calling on Hamilton City Council to direct staff to investigate implementing a new fair fee for our stormwater management system that takes into account the current and future needs of our city. In building a more resilient city, incentives should be provided for property owners to decrease their contribution to the strain on the system - and property owners that contribute the most to the problem should pay the most to solve it. We want a fair system that results in the amount of stormwater running into our systems is reduced, and fees are equitably distributed based on contributions.